Furs and Frontiers in the Far North: The Contest among Native and Foreign Nations for the Bering Strait Fur Trade

Reviewed by James A. Hanson 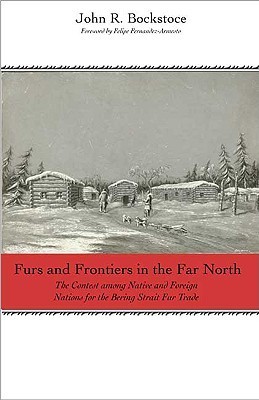 While Russian entrepreneurs and American and European maritime traders had opened commerce with Alaska and the Northwest Coast decades earlier, the vast region above Bering Strait remained unknown until 1819, when an American ship, the General San Martin under Captain Eliab Grimes, attempted to open trade with the natives. He quickly discovered that instead of being welcomed as the harbinger of commerce, his arrival was seen as a threat to the voluminous commerce between the Eskimos and the Chuckchis of Asia that had recently developed due to the expansion of trade between Russia and China for furs, ivory, tea, porcelain, and fabrics. Anxious to protect their roles as suppliers and middlemen, the natives were aggressive and bellicose.

The narrative proceeds both chronologically and geographically to explain the recent growth of this commerce, summarizing Russian expansion across Siberia to Alaska, the arrival of American and British competitors, first by sea and then by land via the Mackenzie River. Efforts to find the Northwest Passage and then the Franklin Expedition led to increased contact and exploration. These were followed by commercial whaling fleets, the transfer of Russian America to the United States, chaos from economic competition, destructive exploitation of resources, and starvation and disease. The book ends on the hopeful note of an evolving economy returning to the fur boom of the early twentieth century accompanied by better and more active government supervision.

Bockstoce presents the reader a complete package by discussing the furs and marine mammal products such as baleen and ivory that were important in the trade, how these were procured and in what quantities, and how the products were then transported and marketed. He does the same with trade goods, delineating the products supplied by indigenous traders, then the Russians, the British Hudson’s Bay Company traders, and whalers who wintered along the Bering Sea coast, and finally the goods sold by the Alaska Commercial Company, heir to the Russian American Company mercantile empire. The significant effects of certain introduced goods -- for example, iron for tools and even jewelry, firearms, and circassian tobacco, are wonderfully documented and make the book a real treasure.

In fact, this book is as near perfect as I think any book about the fur trade can be. It sensitively examines its subject from all sides and from top to bottom. The opinions and actions of the traders, the natives, and the politicians are presented; we learn about the goods, the products, the methods of conducting the trade, and the changing nature of commerce. All the issues, from liquor to destruction of food sources, from diseases to cultural dislocation, are discussed with succinctness, clarity, and dispassion. The bibliography and notes are most complete. The glossary and chronology will both prove useful to the reader. The maps are simply exquisite, and the illustrations are perfect accompaniments to the text. The book is a gold mine of information for historians, geographers, ethnologists, and antiquarians. It shows what can be done by a perceptive scholar who has complete command of the subject and of the English language. I am sure that such a combination is an occurrence worthy of our attention.

Editor's note: James A. Hanson is historian and publications editor at the Museum of the Fur Trade in Chadron, Nebraska.

White Fox and Icy Seas in the Western Arctic: The Fur Trade, Transportation, and Change in the Early Twentieth Century
Furs and Frontiers in the Far North: The Contest among Native and Foreign Nations for the Bering Strait Fur Trade
A history of the Bering Strait fur trade in the 18th and 19th centuries.